The children had been waiting for four hours. The desks were hot like stoves and the kids sat very still, sweating in silence. Their parents waited patiently in the shadow. We arrived with the scorching noon sun of summer to teach a music class for them. More than 100 kids, their parents and grandparents surrounded us in a dusty courtyard in the Chinese countryside. The school walls were a crust of brown. The parents’ faces were tanned and weathered, their hands tough like leather.

Here, showers and laundry were scarce. There was a boy who was blind and another one with a broken arm held up by a string instead of a cast. Among them was a grandmother with a big black square hat who, following the traditions dictated to widows, was smoking marijuana from a pipe.

That day three generations of Yi minority villagers danced Cuban son and clapped to the beat of cumbia and merengue with us. This was the eighth of nine schools we visited that summer, volunteering for a non-profit organization called Unity Bridge. Through music education, Unity aims to fill the void in the lives of rural Chinese children who have little guidance and turn to violence and drugs.

The story of Unity is similar to that of many organizations in a recent explosion of non-profits started by students to help people in remote and needy places. These college students forego the Fortune 500 track, and with a bit of idealism and the right amount of business savvy, they set out to change something in the world. It may be by offering an alternative from a life of gangs and drugs in China, or preventing malaria in sub-Saharan Africa, or teaching children in war-ravaged Colombia. But together they are part of a global trend of positive change in the poorest nations, one that is no longer exclusively in the hands of policy leaders and presidents.

The story of Unity starts with David Borenstein. After graduating from the University of Florida in 2009, he received a Fulbright scholarship to research how internal migration shapes life in rural China. For five months he lived in No. 10 Village in Luoxi Township, a small town in Sichuan Province like many others. It has only mud roads, and though no cities are close by, it is still crowded. It can get to 40 degrees in the winter, with no heating. The smell of livestock is everywhere: outdoors, indoors, when you wake up and when you go to sleep. Nonetheless, people can’t make a living raising livestock anymore because they can’t compete with industrial farming. The town’s most distinctive feature is the complete lack of adults, who left behind only the very old and the very young.

“It was a surreal place to walk through,” David says.

Because positive role models have moved to the cities there is no one to guide kids in developing their talents and skills.

“These children were bored and uninspired,” David says. “There are no legitimate jobs, so they have to turn to the illegal ones.”

High school kids do crystal meth. The place slowly becomes a dumpster and nobody cares, everyone wants to leave as soon as possible. “Urban” seems to equal civilization and progress, so they feel they are backward and have no value, David says. They think the town won’t last much longer. And they’re probably right.

But the idea for Unity actually came from the people of No. 10 Village. Some days, David took his saxophone to school, or played his band’s album for them. A teacher then asked him if he would like to do a music program for the children. David liked the idea and started organizing a music camp.

Back in the U.S., friends from his Gainesville-based band, Umoja Orchestra, decided to volunteer as well. At the same time, charity institutions in Chengdu, China, discovered what he was doing and helped with logistics, provided contacts and organized events.

Their contribution made a huge difference. In the world of non-profits, as David says, every cent counts. With the help of local institutions and volunteers, students working from abroad can make their projects more sustainable. “You have to approach it with a model that works in a very systematic way, like a business,” David says.

Sending students thousands of miles away for just a couple of weeks can be costly and time consuming. And traveling is not always necessary to make a difference in the life of someone who needs it, which is the case for students like Matthew Neth.

Matthew never thought he would create his own non-profit NGO. But now, at 21 years old, he is the president of Tackling Malaria, a student organization at UF that raises awareness about malaria and donates money for preventive mosquito nets in African areas hard-hit by this deadly disease.

Born and raised in Buffalo, N.Y., Matthew is a biology senior at UF who had always been interested in public health. As he took several classes where malaria was discussed, he noticed a problem – and a solution.

“The thing that really got me was that it was preventable,” he says. “With just $10 you can save someone’s life.”

Malaria is one of the deadliest diseases in the world. In 2008, about 300 million people contracted the disease worldwide – roughly the equivalent of the entire U.S. population – and up to one million people died from it, most of them children in sub-Saharan Africa, according to the Centers for Disease Control and Prevention.

Anti-malaria pills can work, but they are about $100 a pack, so the people who need them most cannot afford them.

“But with just one net a lot more is accomplished,” Matthew says. “In terms of prevention that is really the best approach we can do.”

Since January this year, the organization has raised $750 and sent it to Nothing But Nets, a global grassroots campaign to raise awareness and money to combat malaria.

Most of the organization’s funds come from individual donations accomplished by word of mouth. Matthew feels this is the most effective way because they are also educating people in the process. Although the U.S. has no public health problems with malaria, the lack of interest and information is a problem in itself, Mathew says. People in countries like the U.S. have the power to help, but they are not that interested, and many lives are lost because of this. This can be very frustrating for the ones trying to help out.

“It’s a lot of work,” Matthew says. “You need to be enthusiastic.”

Volunteers who travel abroad and observe the problems first-hand are part of the solution to apathy, perhaps the greatest obstacle to overcome. Those who traveled shared the common opinion that traveling creates a direct emotional and physical connection that can entice people to become more involved. Then, watching the positive effects becomes addictive and transformative.

Angelica Suarez is the living example of this. She decided to do her master’s degree in public administration because she understood that way she would be better able to help children who live side by side with violence and have no access to education.

But back in 2003, when Angelica was vice-president at the University of Florida’s Colombian Student Association (COLSA), she found she had a very big problem: she didn’t like throwing parties for no reason. COLSA was especially good at throwing parties, with or without a reason. More than 100 people danced all night to loud Latin music, raising hundreds of dollars – some times, for more parties. But Angelica had a different idea: she wanted it to be for a good cause, and so she founded Children Beyond Our Borders (CBOB). It started as a small committee and then developed into a UF student organization. Now, seven years later, it is a NGO planning its 11th trip to Colombia in March 2011.

According to the United Nations, Colombia has the second-highest population of Internally Displaced People in the world, due to a 60-year, brutally savage conflict – the longest-running in the Americas.

Since it was an issue close to her heart, Angelica took CBOB as a personal project. Now, she is 26, neatly dressed and always ready with a smile and a soft-spoken kind word.

The CEO and founder of CBOB found the inspiration to keep working hard in her first trip to Colombia with the organization in 2004. There, she met Pablo, an 8-year-old boy from the slums of Medellín. Angelica told him to ask for whatever he wanted, and his “friends” from UF would do anything to get it for him. He could have had anything he wanted for Christmas – toys, clothes, money. But he didn’t want any of it.

“Pablo made me understand my reason for living,” she says. 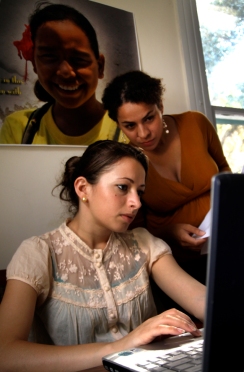 Prior to that first trip in 2004, five U.F. students raised 500 pounds of clothes and toys and took them to Medellín. Now, they do five annual projects in Medellín, Cali and Cartagena, two weeks at a time over spring break and in the summer.

Originally, these projects focused on things like math or writing. But it turned out these children have similar problems as the kids in No. 10 Village, in China. Abject poverty makes them feel like they don’t count, like they are trapped and are responsible for it. The volunteers noticed this when one day a boy interrupted a geography class to give the teacher a hug. Other kids weren’t interested in talking about science, but wanted to talk in private about pregnancy, or about gangs. The pattern was repeating, raising flags with the volunteers.

So in May, a new program was created under CBOB that teaches values like respect and self-worth for 16- to 17-year olds. They teach them how to create their own small businesses, work in a team and contribute to their community. A scholarship program was also created for the kids who wanted to continue learning, in exchange for a two-year commitment to help their community.

“That way, the cycle of poverty and violence ends,” Angelica says, “and the benefits stay with them.”

Still, she is debating who has more fun, the kids or the volunteers.

“The kids teach us more things than we can teach them,” Angelica says.

She speaks from experience. Pablo showed her her reason for living.

So what do you think? Cancel reply